Discontinued due to obsolescence and unavailability of parts.

The TDFM-636 VHF FM dual band is the latest addition to the TDFM-600 series line of transceivers. 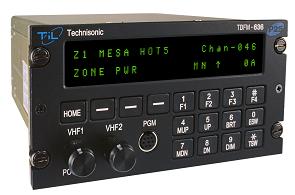 It offers the most up-to-date maximum performance technology including P25 CAI, P25 Trunking, AES encryption with P25 OTAR, and front panel programmability. This radio is designed to support the needs of the most demanding airborne missions including federal law enforcement, homeland security, and para-military operations. Two separate VHF RF modules each capable of transmitting with 10 watts (high) or 1 watt (low) of RF output power will allow independent operation from each other. One module supports conventional operation with front panel programming and the second module supports VHF Trunking operation. The unit is APCO Project 25 compatible in both conventional and trunking modes. P25 (9600), SMARTNET and SmartZone trunking protocols are all supported. It is also encryption capable including AES/DES-OFB with P25 OTAR on both RF modules.